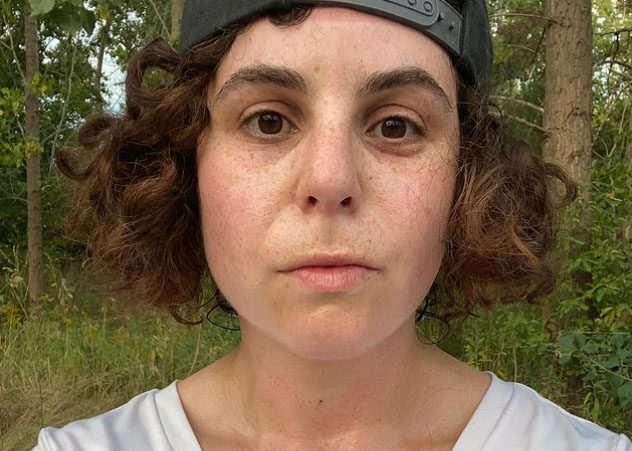 I’m trying to trace my trauma.

The sun sets somewhere outside the corner of my eye and my dog is staring at me waiting for me to play but I know he’ll be fine if he just find s a stick, lies down and chews.

The doctor called it Vertigo. She told me “what’s strange about vertigo is that’s it’s a symptom. It’s not an actual diagnosis. It’s just a symptom, usually of another problem. Or it’s possible for you to have something called somethign soemthing something something

She told me to do neck exercises but only if someone else is with me when I’m home.

I used to live alone.

During the pandemic, my boyfriend and I tried to live there together but we ended up moving in with family in North York, the tip of the city. It’s my grandmother’s house. She died last February and we moved in a month later. Now, we’re looking for a new home but we can’t find one because Toronto’s housing market is preposterous.

We’re guests in this home together. Home feels strange.

Sometimes I sit and wait for the entire sky to drip through the ceiling, the atmosphere is stale, the temperature is never quite right.

When tipping the head back, make sure you’re never plugging your nose.

There are times when I get nothing done, weeks like this one that just pass and I do very little but wait to feel normal again.

Have we only ever felt the sensation of waiting to be like everyone else?

I asked myself today what it would be like to live in a glass dome. Stars. Snow. Maybe I’d see animals.

I’d write simple executions of abnormally sized stories, stretching past a single person’s life but not far enough into someone else’s.

There’s a bomb that goes off, while I’m writing, just as I pass the point of a personal story.

I’m telling a personal story and I stray into THEME, suddenly feeling disaster, feeling like I’ve gone one step too far towards ruining someone else’s life.

We underestimate our impact.

I try hard not to interact with anyone because I know I can only impact them more than I intend.

I’m reading The Body Keeps The Score, wondering about what my headaches could mean? Are these headaches, is this vertigo, a physical issue? Will the neck exercises work?

Or, are these headaches, is this vertigo, a symptom of trauma?

I’m trying to retrace the trauma that may be causing these headaches but I’m finding it difficult because the real answer might be too deep. Too far away. It might be at the centre of my vertigo in which case I will, definitively, never find it.

Here’s me tracing my trauma:

It’s the fact that I gave up my entire identity when I learned that I so severely upset him, I funnelled all I had into apology and from there I reconstructed myself into someone who was absent of him.

It’s the part where I am grasping for a purpose so desperately that I take one look at him and decided “oh, it’s over there. It’s him.”

Someone recently asked me if I think that my tendency towards social anxiety and introversion is because I was born that way or if I learned it from the household I grew up in.

Of course, I think it’s a combination of things.

But, now that I’m writing a memoir about my family’s inter-generational transmission of mental illness, it’s clear that I strengthened my introversion as a child, I hid, because I knew that I was in my mother’s way. She was sick. My dad was constantly working. I was in the way. And so, now, I am inclined to dissappear.

And, I remain afraid of self-actualization.

The trauma headaches, if that’s what they are, they always come when I’m on my way to better things.

I start to feel a pressure.

I looked at him and decided, oh that’s him. At that time, I should have been proud of myself, so proud of myself that I would never be looking for romance. But, I couldn’t own that feeling. Instead, I felt doubtful, ashamed, awkward. I stopped trusting myself. And, I turned my head and found him.

When I was a kid, it was food, pills, alcohol.

I don’t know why shame gathers sometimes but when it does, it gathers right at the tip of my head and I want to know exactly what trauma causes such a tension in my head but I think it’s all of them because, they’re all the same.

When we feel like NO, we look for a yes.

I suppose I could just be ok with the fact of No, that it will happen, that it is happening.

I can’t remember what I was looking for when I began this post but I can tell you what I’ve found: nausea, aloneness and a chill in the air. Some ambient music, a sense of “I can just sit here and nothing bad will happen,” thirst and a gratitude.

Tomorrow I will try to look ahead. At myself and the things that work.

2 replies to “Trauma Headaches and Vertigo”