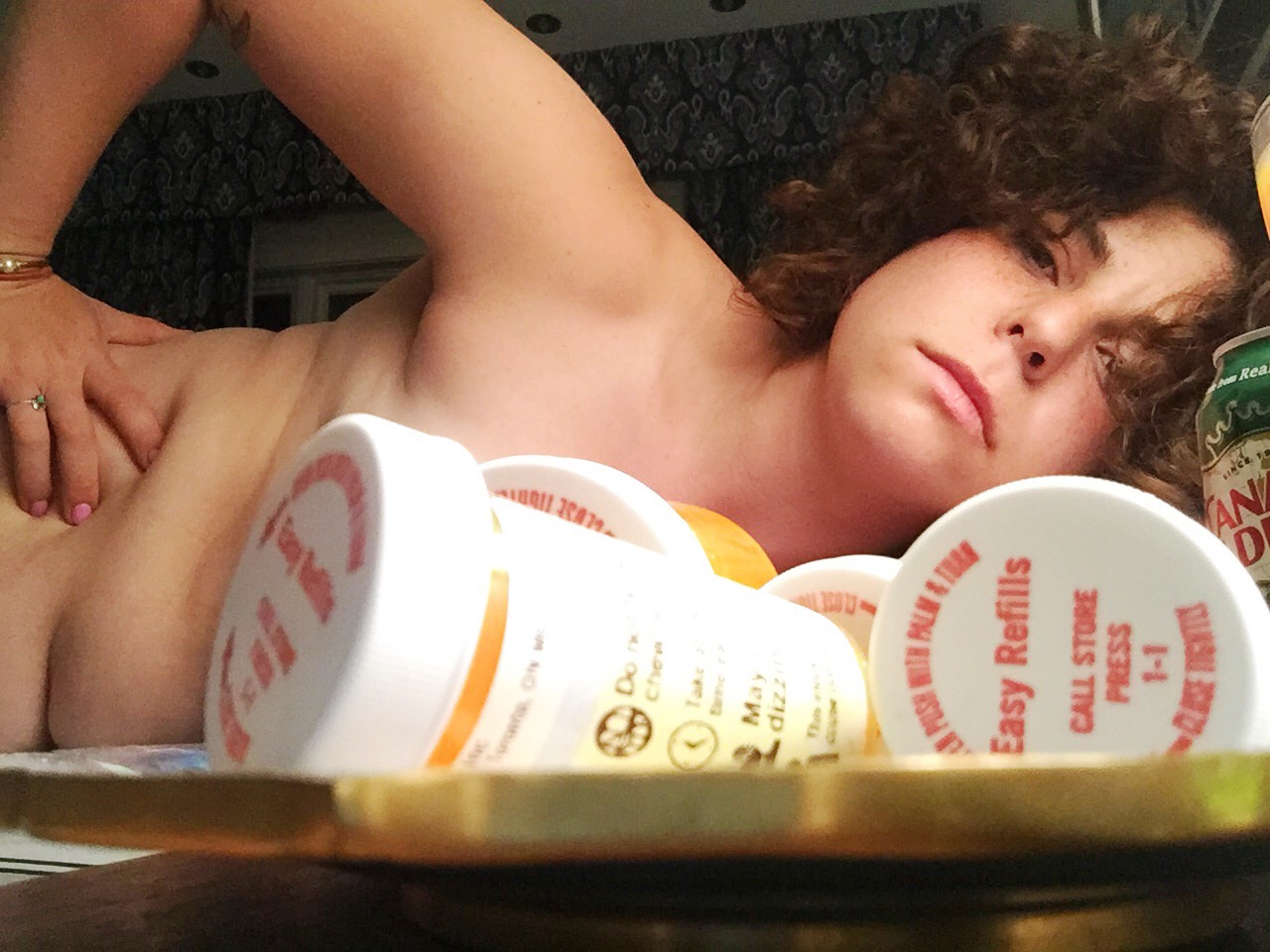 Her voice reflects the current stereophonic trends of Toronto’s Young Female population.  It is as if she pitches her sentences to harmonize with stray puppies or with the kind of wind instrument that symphonies conveniently forget to include. All phrases end in a question mark.  All remarks are complemented with a dismissive giggle.

I wake up early, almost puking.

Once, a while ago, I read that, should you salivate while nauseous, do not swallow the saliva.  Spit it up.

This gastro refluxology technique (which I call “Spitting”) is only slightly less disgusting than vomiting, particularly on this morning where I have nowhere to spit. I let drool soak my sheets.

I collapse back into my pillow.

I am lying in spit.

She lost most of her excess before graduating from middle school.  We all know she used to be quite heavy.  No one cares.  Still, most of Steffi’s efforts in life, in general, are directed at hiding her bloated stomach. It is impossible not to glance at her gastro.

I have always been larger than average.  Since seventh grade I have spent hours a day on the treadmill, I have diligently followed my mother’s collection of fitness VHS, dreaming of a body made of steel.

I have been crash dieting for three years.

Susan Somers has written a series of diet books.  Using the Ayurvedic and very ancient methods of Food Combining, she has custom-crafted a “diet” and named it after herself.

There is an illustration included in the introduction to Somer’s book.  Before:  A cartoon bloated woman.  After:  Same cartoon woman, no longer bloated.

It has been six months.  I look like the After cartoon.

My High School is unmistakably Hebrew.  The average height here is Short..  The girls are typically anorexic, thanks to their mothers and lunches of shared candy and Diet Coke.

Steffi is eating yogurt in the hallway, sitting cross legged on the floor, surrounded by tiny girls who have no problem discussing things while laughing.

I am walking by and wondering if I am visible today.  I stop to look at Steffi’s stomach.

I look at her.

“You look so great, what have you been doing?”

One time I went to Steffi’s house.  I was invited over for God knows what humiliating reason.  We were eleven years old. There was a whole group of us there.  Her mother offered us coffee.

I have still not learned how to speak to people.  I am suddenly having a conversation but, most days, most weeks, I do not speak to anyone. This is a learning moment.

“How are you doing it?” She has the smile of a woman who needs to know.

If you ask a man about his mother and he can’t find a way to speak about her it is likely because she isn’t well and he’s just not allowed to say anything.

Steffi is in my drama class.

I can’t make friends in tenth grade drama because I know who Chekhov is and it’s fucking with my ability to respect the initial insistence that this class is teaching us anything worth calling “Drama”.   If we have no ownership, we have no drama.  That’s what I know. I am fourteen and Chekhov has taught me dramatic intent.  There is no ownership here.  There is no drama.

Steffi is standing on stage.

It isn’t a real stage.  It is just a bunch of risers.  It feels as though the school had this extra empty room and the board of directors stood in here together for exactly one minute before one of them shouted with the pride of a man who thinks about things “OH I KNOW, WE CAN MAKE IT A THEATRE KIND OF THING” and they put some risers in the corner of the room.

Steffi is standing on stage, holding her hands in front of her face, trying to “Improvise”.  These improv games are very important to me. I find value in watching my peers humiliate themselves.

This is the year I almost kill myself and, without wanting to hurt anyone I know, I look forward to the moment in my day where I do not feel like the most failed human being in the room.

Steffi is on stage and she is failing.  Her hands are gesturing without consequence.  She starts laughing.  The class starts laughing.  I sit with a silent smile.  If Chekhov were here he would not be laughing either.  If Chekhov were with me, we would agree that this girl is hiding her pain and if she were more dedicated to the audience, she would be still and allow momentum to entertain us.

She doesn’t have to do anything.  There is nothing worth doing.  But, she laughs.

My knees press into my arms as I sit with my feet on the floor, hugging my legs.  The clown is hiding.

This young woman might be thin and laughing but she hates that her stomach is bloated. Even her voice is fake.

She is hoping to hide drama and, in doing so, fortifying future private and sudden dramatic tension as she laughs for the moment without regard for later. This evening she will remember how little she offered.

Or, she won’t even think about it.

I’ve stained a lot of things in my life but the menstrual stain on the white inner fluff of my bright blue sweat pants is particularly taunting this morning.  They lie, inside-out, on the floor of my parents’ guest room: A sign of carelessness combined with the promise of motherhood.

It is Soccer Day at school.

I attend a school that has three campuses. All the campuses come together for soccer day and we play indoor soccer.

I meet Steffi for the first time.

Steffi is fat.  I don’t notice.  I will not notice that she was ever fat until she becomes skinny.  She is, somehow, trying less than she will eventually try for social value in high school but she is still very loud and very fake.

I am standing with a set of very popular twins from my class. We are friends.  I have friends in seventh grade.  My class is very small and we have all been together since kindergarten.  By now we get along, popular or not, pretty or not, it doesn’t matter.  We get along.

I realize, as Steffi approaches us, standing with these gorgeous and popular twins, in this moment, I appear to be very popular.  Steffi starts gabbing at us about soccer.  The twins eventually walk away..  Steffi finally tells me her name.

“Are you dating anyone?”

“Are you dating anyone?”
“I don’t know anyone,” is my very demented but frightfully true answer.  I have tried a couple of overnight camps.  I was too busy shitting my pants from homesickness to make any friends.  I really do not know anyone.

Steffi spends the rest of soccer day, carting me around, introducing me to people.

She keeps calling me “Rache”.

By the end of the day I am dating a boy named Andrew.

It takes going home and talking to him on the internet but I end up telling this boy, by the end of the day, that “ok” I will be his girlfriend.

Steffi introduced us.  She is in his class.

He starts sending me sexually explicit messages over ICQ messenger.

I stare at the screen.

I told him I would be his girlfriend.  How do I untell him?

I stare at the screen.

In days, all of the school’s campuses will join together again in some sort of Israel Independence Day ceremony.

Andrew tells me, “I’m coming to your school.  I’m kissing you tomorrow.”

I go to school.  I tell the twins about Andrew.  The twins tell every other girl in the class.  By lunchtime I am being told that “Andrew is gross and he dates or tries to date or tries to kiss every one.”

Andrew appears with his campus after lunch.  We make eye contact once.

Steffi waves to me.

I haven’t been taught how to wave to people yet.

Andrew sends me messages that night.

I think very hard about how to deny this boy any more access to my person.

The word No doesn’t even occur to me.

Luckily I have been telling everyone, for years, that I have a best friend named Evan who lives in New York City.  Evan becomes my exit strategy.  I kill him.

I tell Andrew that a friend of mine has died and I really can’t date any one right now.

Andrew tells me I am stupid, ugly and fat: The Trifecta.

He tells me these things over and over again.

My brother comes downstairs for his turn on the computer. I leave him the PC and go to bed.

Tomorrow I will learn that my brother deleted Andrew from my account.

I don’t talk to anyone for weeks, other than to mention that my best friend Evan is dead and I really just need to be alone.

I took my medication without food last night.

In the real morning I will eat.

My dog jumps on the bed with his forelegs.

I stand up and boost him, pushing his bum until he lifts the rest of his body up and cuddles beside me.

He takes up most of the bed.

I am lying in spit.

Thank you so much for reading! If you like my work and you’d like to contribute, I have a show in the Toronto Fringe festival that needs your support!

Be sure to come back tomorrow for a brand new essay or subscribe for daily updates!