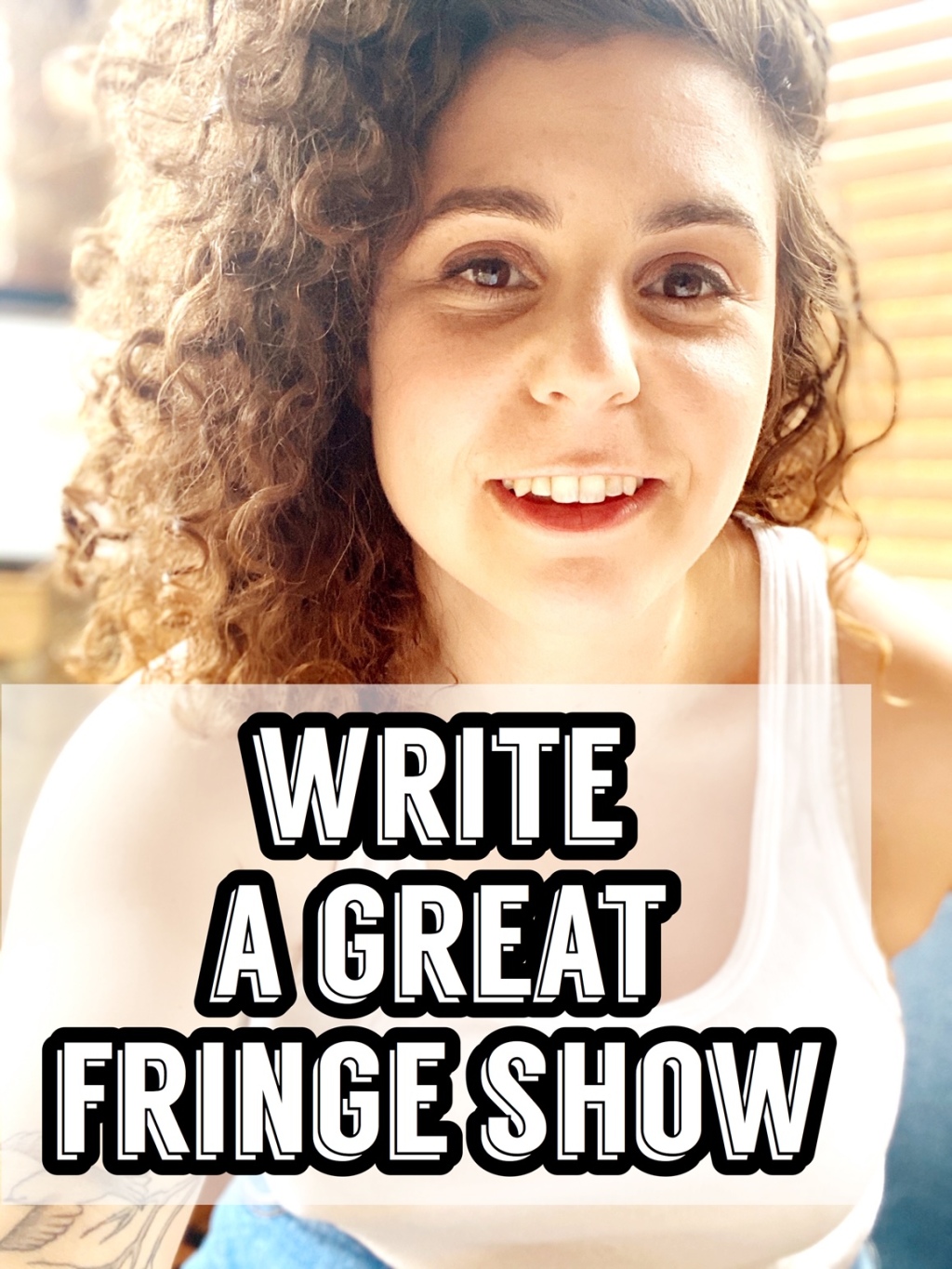 Every one I know is freaking out about their Fringe show.

In my (vast) lifetime, I have had two very different plays in the Toronto Fringe and I understand the damning deadline.

Maybe your concept doesn’t suit sixty minutes, maybe you have been told you suddenly need to write a female character when you really had no interest in doing that (I see you), maybe your play is bad. Maybe it’s just really bad and you need to fix it.

You’re not alone. Most people write their Fringe play only after their name is pulled from the lottery. So, everyone is similarly “I DON’T THINK I AM GOOD ENOUGH AND I AM PROBABLY DOING THIS WRONG AND I CAN’T WRITE ANYMORE—“

Shut up for a second and let me help you.

Write What You Want

First of all, it’s a huge leap into a giant ocean of unknown competition.

Will anyone come see your show?  Well, yeah you just have to market it, dumbo.

But the truth is you won’t want to market it if you hate it.

BELIEVE ME, if you do not like the show, you will sink sink sink drown in the Fringe ocean of STUFF ON STAGE because you will give up under the pressure.

No passion, no play.

For example, I once assistant stage managed a show called “Drag Queen’s Talk About Their Vagina’s”. The title truly says it all. I saw that show several times. What’s it about? Not sure.

I have also been caught in the “OH FUCK I NEED TO WRITE A THING THAT I NEVER INTENDED ON WRITING” ambiguity trap.

Pretty easy plot line. The conflict was originally just between the two girls: What do they do? But, I couldn’t sustain that conversation for sixty minutes. Oh well, right? NOPE. It’s already in the Fringe. Keep writing, Rachel.

How did I add thirty minutes?

Oh, half way through the teacher walks on stage.

I spent a month on the couch, depressed because I could not decide what he says. He comes in and…what does he say??

I laugh thinking about it, that stupid line.

It’s raining outside which is well established at the start of the play and the teacher walks on and says, “How’s the weather?”

Nailed that. No I didn’t.

I underdeveloped the character because I simply don’t have enough time write it and he remains to be an impulsive vomit person from my imagination.

HERE IS A FUN FACT FOR THE SAKE OF LEARNING: When I began writing that play I was a virgin. I had an awful time writing the sexual vocabulary of the play. After I failed, after that week of lying on the couch in December, I ventured out and lost my virginity to someone who I eventually learned wasn’t at all available or interested and I wrote this angry man thing into my show based in my most recent impression of heterosexual scandal.

And I did it all because I needed a 60 minute play.

I twisted my arm and twisted my content until I couldn’t even see the point of original point of the show anymore and I ended up with a weird thing that shocked and frightened people.

I still love that show because I remember it being the first time I really set myself free and wrote from my vulva but if I could spend more time with that male character, outside the pressure or WRITE FOR FRINGE, I would greatly improve the piece.

grab a piece of paper and write five sentences, one for each act of your play. Until you can write the five act structure (described below) in five sentences, until you KNOW the story you want to tell, the whole thing, do not move forward.

Let me explain what I mean by “Five Act Structure”.

In Poetics Aristotle describes five acts of every play:

Spend Time in the Mine

You know what you’re play is about now. It’s time to dig dig dig.

Now that you have the example of me writing a flat male character because I was going through some life moment that I wasn’t really aware of, consider this:

Put your draft aside and enter the mine.

In order for you to write an authentic show of any kind, you need to mine the content for what you truly want to say and unless you write enough, you’ll never know.

While writing Teach Me, I put the script aside and wrote diaries for two weeks for each character which helped me tremendously. Each character’s inner life brought great colour to the conflict of the play which gave the actions of the play much deeper meaning.

Try journaling on behalf of your two main characters or, if you’re short on time, try spending a day with pick one of your characters. Take them out for a day! Do all their favourite things (or maybe it’s the cheapest version of their favourite things), feel their hand in yours, laugh with them and then sit down with them, grab a writing tool and interview them about the events of the show.

I will never forget the first rehearsal of The Queen’s Eulogy. We read the first draft and I was mortified: What have I written and why did I make these people read it.

The Queen’s Eulogy is a site specific show. My collaborator, Tanya, and I spent a lot of time planning fundraising and branding, we had to find an excess of money because our site charged us a fee that we weren’t expecting but I really really wish that I took more time to hear the play read.

I don’t mean anything fancy.

I am recommending you get some friends together, order everyone some pizza and hear your work. Listen to it.

If you’re performing a solo piece, read it into a voice memo and just sit back, listen.

Forget how funny you are. Forget how smart you are. Sit and listen to it as an audience member and experience exactly what the people who pay to see it will experience it.

You need to remember that your audience is going to be your biggest marketing tool. When they leave the theatre, are they going to be excited to tell everyone about this play? Be honest with yourself.

How does this story, this language, how does it land?

Let me give you a hint: If you feel at any moment “I don’t know”, cut that moment.

If you aren’t sure, no one needs to see it.

iThere are no comments

Begin typing your search above and press return to search. Press Esc to cancel.