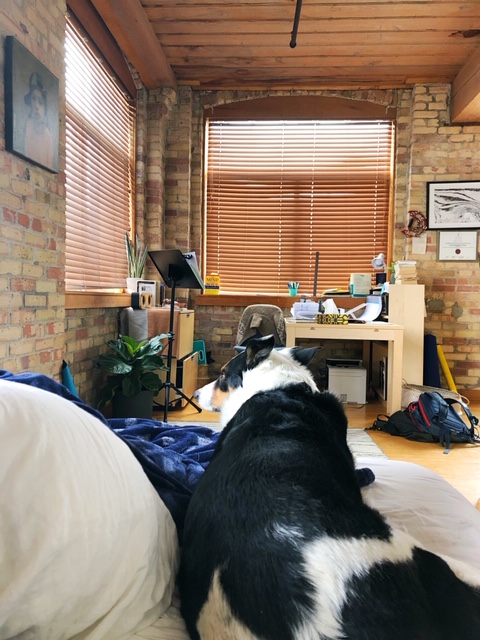 I have frontal headaches. My emotions are attacking again.

Every day I make a list of things to do. I then proceed with my day. I forget about the list until the following morning where I make a new list which I will surely forget about as well.

I am trying to function with a consistent behavioural rhythm productive enough to be termed “Adult”.

I want to do that.

I fear that I am not very reliable.

I am lying in bed with my dog, wondering what exactly is on my list of things to do. Dive back into the novel I am writing. Read the research that is piling up on my desk. But those things require my frontal brain and my frontal brain hurts.

I cannot tell if I am failing or not.

I have painful physical impulses. The pain gets in the way of my adult productive life.

I cannot imagine life without these impulses.

I assume that very successful people do not experience as many mental roadblocks as I seem to experience in a typical week.

I don’t know what to think about successful people.

It seems we don’t even have the same brains.

The Limbic System is the system of structures in your brain that control memory, mood and emotion. The system crosses over the different lobes of the brain. The Amygdala, a tiny almond-shaped grey mass of neurological matter, is where we retain our emotional reflexes like fear and anxiety. The Amygdala is a survival mechanism. Using our sensory system, it can put the body in state of emergency if it detects oncoming danger. But, if the Amygdala is yelling EMERGENCY EMERGENCY EMERGENCY EMERGENCY all the time…well, that’s when we lose our minds.

I know my brain is overworking its state of emergency. I can feel the motherboards sparking. Burning. Fuming. How do I cut off my brain?

The pre-frontal lobotomy was introduced in the late 1930s.

During the procedure, doctors disconnect the amygdala from the rest of the patient’s brain.

Well, what a novel idea.

Just take emotions: Out of the brain!

The brilliant thinking behind this invention goes something like this: These patients are useless members of society. They are throw-aways. They are yucky. They are just: Too emotional.

Let’s just chop up their brain and then they will function without emotions!!!

(JUST LIKE THE SOCIOPATHS WHO WERE OPERATING ON THEM!)

Of course, by the 1960s there are countless accounts of horrific brain damage in lobotomy patients. Most of them are left with no personality, their memory for things as basic as motor function completely taken from them. As emotionless as they are, they can not relate to anyone, finding no motivation to combat laziness.

I relate to the no-brain people. Depression leads me to laziness supported by my inability to relate to people. I have no memory. I have no co-ordination. I might as well have no brain.

Through the floorboards I also hear children, a woman walking in heels, a radio and once every hour the movement of furniture. Somehow these noises make sense to me.

I cannot organize my day but I can organize the sound of the man above me and his family life and his tendency to move items around in space and his need for noise in the background and his interest in other people and his ability to listen and his ability to be a team player and his non-quitter mentality of SURE I WILL DO THAT THING YOU WANT until it is done or until it warrants another phone call.

I admire this man. For making phone calls. For remaining diligent and dutiful.

I hear the man get emotional.

I hear his emergency. I hear his hatred. I hear the clicking of the woman’s shoes. The child starts crying. It is lunch time and everything is breaking upstairs.

I cannot handle this man’s emotions. I believed in him and his calm and his rationalities. He is yelling. I am felling EMERGENCY.

I put on headphones.

I cut off the source of Them, There, Anywhere.

I feed my brain new sensations: the sound of waves, whale noises, wind.

I am calming my amygdala.

SHUT UP EVERYONE I AM CALMING MY AMYGDALA.

It will take me all day.

Nothing will get done.