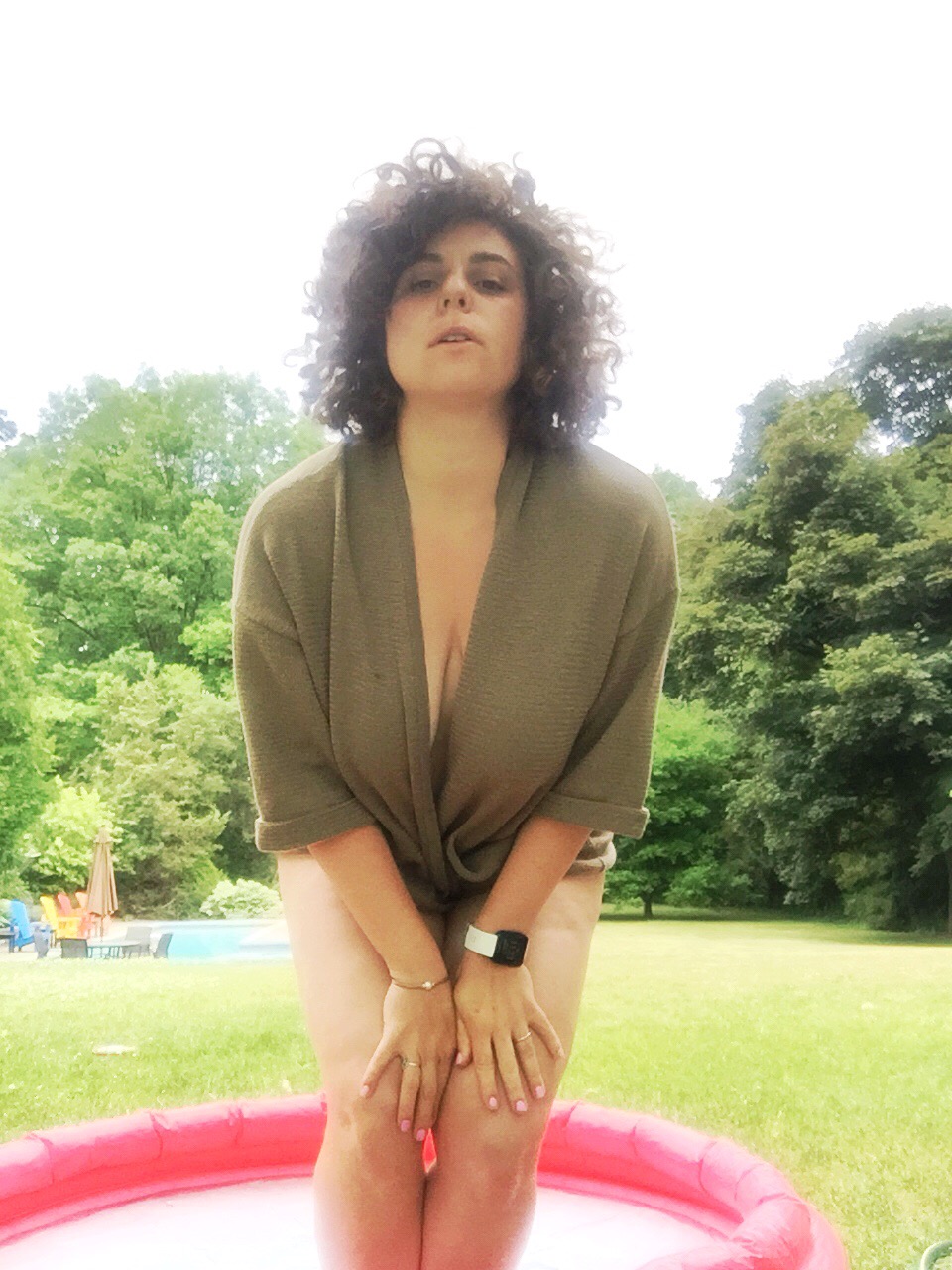 J lies back. He is naked. I am naked. There is no reason for our nudity.

I am a virgin. I have established Nothing sexually for myself in my life or in this bed or in this stupid relationship with J. We are naked for the sake of suggestion. He has been coming to my house to lie naked in my bed for about a month. I nearly fuck him every night. Tonight is no exception.

Minutes ago he was kissing me. I sat on top of him. I said, “I really want to fuck you.” He said, “ok.” I kept kissing him until I found a reasonably graceful way to back away from his cock.

Our relationship is facilitated by a shameful repeatition of Almost, of Nearly, of Oh No I Can’t. He is waiting for me to initiate sex.

Even though I am the virgin, J reasons it is “up to me”.

Yesterday I had a conversation with my mother over a vegan Chinese lunch in Kensington Market about how un-Jewish J is and how afraid I am to date him, to have sex with him, since we just won’t work. “I can’t date a gentile,” I tell my mother. “What will dad do?”

With a tired smile and a tense stare into her Chinese crispy fake chicken mom tells me, “Just be happy, Rachel. I just want you to be happy.”

J is lying back on my pillow. He looks infallibly unhappy.

An email appears in my inbox with the subject heading “FRINGE FESTIVAL—JEWISH?”

A publicist from the Toronto Fringe Festival is sending around a generic email “just to see if anyone is Jewish” so that she can send our title to The Canadian Jewish News for their feature on the “must-see” Jewish Fringe plays.

I find the email kind of funny but mostly abhorrent.

I send it to a friend of mine who works in journalism.

I write back to the publicist that I am Jewish and in fact I am the Writer of my show and that no one else in our company, to my knowledge, is Jewish. I tell her my “Bubie will be THRILLED” to read my name in the paper.  I get an email back with a “hahaha great! I will let the journalist know and fingers crossed.”

“You know, she probably isn’t Jewish,” my friend tells me.

The thought was never a consideration. Sending emails around in search of Jews feels like an awfully strange thing to do for someone who isn’t Jewish.

“I told her that I am Jewish, I am a Jewish Writer. I told her my bubie would be thrilled to see my name in the paper.”

“She probably doesn’t know what a bubie is. Also I think you spelled the word “bubie” wrong. We spell it “Bubbie”.” My friend is also a Jewish writer and perhaps, it seems, a bit more aware of our rarity.

I stare at the email.

I have a soft spot for Zadie Smith.

I read her essays on my parents’ deck while listening to the live, saxophone-accompanied rendition of ‘Sexual Healing’ coming from next door.  Our neighbours are having an intimate dinner. With live jazz music. Outside.

Coincidentally, today I noticed that Ben Harper will be playing in Toronto this summer as part of some sort of jazz festival.  I noticed his name sitting atop a long list of people on a poster in a bus shelter. I wondered about his age, about my age, about the age of Jazz.

For the longest time I could not care to remember that Zadie Smith is Black. Reading her essay, I wonder if that would bother her.

I read Philip Roth’s The Human Stain for the first time in eighth grade.

I find the book on my mother’s bookshelf. I steal books from my mother every day.  Her bookshelf is a great influence on my maturation. There is a library at my school but its mostly picture books and encyclopedias. Mom has Philip Roth, Primo Levi, Saul Bellow, Anne Marie Macdonald, Margaret Atwood, Alice Munroe, Toni Morrison, Zadie Smith. She has Women and she has Jewish Men. There are no Jewish Women here. She has Jewish Men. She has Women.

I will not understand The Human Stain until I read it for the fifth time in high school. I will eventually recognize Roth’s gorgeous parallels of agony between genders and races but for now, in eighth grade, I stare at one passage for time immemorial.

“We leave a stain, we leave an imprint…”

In this passage, Faunia is visiting a crow sanctuary. There is one crow who never learned to Caw because he grew up relying on humans. Now he cannot communicate with the other crows. The humans have influenced his agony.

I cannot believe how fluidly Roth is able to insert the word Stain into this passage. I think about it and I think about it: He put a word from the title into a passage at the end of the book? THIS IS REALLY WRITING.

Without any idea what the book is about, a write a speech for our public speaking unit entitled The Human Stain.

I win the public speaking contest that year. I have never won anything before in my life. I am a writer. I am a speaker. I am a young woman. This is a Jewish school.

I am proud for the first time.

I accidentally tell J that he is a gentile. He has gone on and on his Jewish friends including the detail that his best friend’s family calls him the “honorary Jew”. I have been trying, for a very long time, to hide who I am, to not admit that I am Jewish, to not be tethered to any roots. I don’t like telling people I am Jewish. I don’t like watching them use their head to find a relationship to my identity “oh yeah my best friend is Jewish and…do you do Shabbat? Do you do like, Friday? Do you light candles?” The surveys are gross. The conversations are annoying. There will never not be stereotypical assumptions made of Jewish people because we are usually hiding.  No one knows. No one really knows.

My twenties become the time to learn that I am a Jew and men are intrigued. I find J annoying. I find the term “honorary Jew” annoying.

“But you’re still a gentile,” I tell him.

I have no problem reminding him, “You say shitty things all the time.”

“Yeah but it isn’t because I think I am better than you.”

“I don’t think I am better than you.”

“Gentile means “worse than” a Jew.”

“No. It just means Not Jewish.”

“No. It doesn’t. I know. You Jews think you’re so smart. You have your own secret fucking language. I’m fucking sick of it.”

I am on my feet, crying.

When will I get to be him?

I have written one Jewish play. It was terrible and accidentally anti-Semitic.

The actors were not Jewish.  They were in a “Jewish Play”. They called it their “Jewish Play”. I laughed along with them at my own culture. Klezmer hip hop filled the transition scenes. It was impossible to keep my Jewish Comedy from laughing at itself.

All Jewish Jokes are seeming redundant pronouncements of ancient anti-Semitic discourse. Sure we are self-hating. Sure the jokes make sense to Us. But no one in the show is Jewish. Most of the audience isn’t Jewish. They are certainly laughing at The Jews. Why wouldn’t they? I made it easy.

He laughs. I wonder if we are becoming a couple.

I wonder if he would rather I start calling him The Honorary Jew.

Maybe I should soak him in a sexy ritual bath.

Maybe I circumcise him.

It will take one more pronounement of his gentilic identity for him to never talk to me again.

My teacher is telling me that “Only Jews can write Holocaust plays”.

There are six people in this class.  After interrupting my presentation on Hannah Moscovitch and East of Berlin many times, my well-respect, very talented, Canadian award winning teacher is telling me that “Only Jewish writers can really get away with writing Holocaust Plays.”

Or, maybe I can offer her a bit of an education.

What about European WWII literature? German poets, Polish novelists, Hungarian music? What about Yann Martel?  What about Sophie’s fucking Choice?

NO I want to tell her NO I want to tell her NO “This play is a very very sanitized version of a Holocaust story. This play? Written by a third generation Canadian Jew? Is a very polite, allbeit dark in content, but very careful representation of a Holocaust story. You should READ the fucked up shit coming out of Germany. One poem. Go read ONE POEM. And it won’t be Jewish. And you can fuck yourself if you think the Jews have a monopoly over anything. And you can fuck yourself if you think that I or my fellow Jews would EVEN WANT to have control over anything.  We just want to write. The same as you want to write. And if that means that I’m stuck WITH FUCKING HOLOCAUST STORIES BECAUSE THAT’S WHERE MY ENTIRE FAMILY PERISHED AND THAT’S WHERE I COME FROM then that’s what I am going to write. I am stuck. I am stuck with The Holocaust and its stories. I am sorry. But, I am stuck. So, by all means: If you have a Holocaust story to tell, go write your dream play.  No one, not even the angry Jews, are stopping you (table flip, storm out, mic drop, shit on the ground, run home).”

I don’t say any of that. When I get home, I rant to my dog walker. We smoke and drink beer. It keeps me from hurting myself.

I tell my mother about the email I received from the Toronto Fringe (“Jewish?”).

“Did you tell them that you’re Jewish?”

She has to ask me because, for a time, I denied being Jewish.

“yeah. I did. Maybe I’ll be in the paper. My journalist friend says that she’s probably not Jewish. Isn’t that a rude email? If she isn’t Jewish?”

“You should tell the paper! Then they’ll have a whole feature on you and how you received a rude email!”

I stand on the stage singing an old Jazz standard for the first time in years.

My grandmother, my bubie, loves when I sing. She keeps asking me to sing at our synagogue.

I will never do it.

Thank you so much for reading! If you like my work and you’d like to contribute, I have a show in the Toronto Fringe festival that needs your support!

Be sure to come back tomorrow for a brand new essay or subscribe for daily updates!

AND SHARE THIS POST, SISTERS, COME ON, put it on your wall, IG, tweet, email it someone I have made you think of while reading…your secret crush? Your secret…WIFE? I don’t know…just do it.

All the best, calm calm peace,